The Center for the Study in the Professions will be closed December 24-January 1st during IIT's winter break. We will resume normal hours (9-5, Mon-Fri) on January 2nd.

Yesterday, December 4th, a New York Post freelance reporter, R. Umar Abbasi shot an incredible photograph of  Ki-Suck Han, a man who had just been pushed onto the subway tracks at New York's Times Square Station.  The photograph shows Han facing the oncoming train, reaching up to the platform but unable to get off the tracks. The New York Post published the photograph on its front page, accompanied by the headline, "Pushed on the subway track, this man is about to die."

Now, the incident has sparked a national debate, not only about why no one standing near Mr. Han tried to help him, but also about the ethics of taking and publishing this kind of photo.

Mr. Abbasi has defended his actions saying that he kept taking flash pictures in an effort to warn the train driver to stop in time. "It all went so quickly; from the time I heard the shouting until the time the train hit the main was about 22 seconds."

What do you think? Regardless of the actions of the photographer, do you think the New York Post should have published this photograph on its front page? Did the publication of this photo somehow convey a message, or was it just published for its shock value to sell newspapers?

For more news and different viewpoints on this case,  check out the Christian Science Monitor, the New York Post  and the New York Times,

You may also want to look at media codes of ethics or take a look at a post from the Poynter Institute on the ethics of this case.,
Posted by CSEP at 9:54 AM No comments: 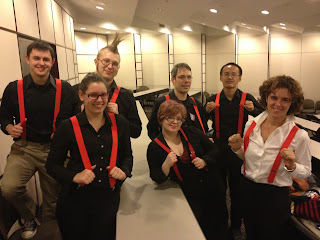 On December 1st, IIT’s Ethics Bowl Team participated in the Upper Midwest’s Regional Ethics Bowl at Loyola’s Watertower Campus in Chicago. The team competed against 17 teams from 14 schools around the Midwest, answering questions from a panel of judges about a collection of cases the students have been discussing since the beginning of the semester. The team won two of the four matches they participated in, and of the two teams who scored higher than IIT, both are part of the only four teams who were able to go on to the National Competition The IIT team members are: Ed Feibel (senior, architecture), Kari Finseth (senior, architecture), Alexis Renk (sophomore, biomedical engineering), and Tom Waller (junior, biomedical engineering). The coach is Stephen Harris, Sawyier Predoctoral Fellow in Philosophy, and assistant coaches  Kelly Laas, Librarian of the Center for the Study of Ethics in the Professions, and Rui Chen a first year graduate student in information technology and management.

The Intercollegiate Ethics Bowl is an academic competition with rules and procedures designed to model the best approaches to reasoning about practical and professional ethics. Created and developed by IIT Philosophy Professor Robert Ladenson, the IEB has spread to include well over 120 teams from all over the Unites States and Canada.

Congratulations to IIT’s Ethics Bowl Team for all of their dedication and teamwork this semester, and an incredible performance on Saturday! The team will have its first meeting next semester on January 14th during lunch in Siegel Hall Room 218 to informally discuss the cases from the National Ethics Bowl, and begin planning for next year’s competition. If you are interested in being a part of Ethics Bowl, please send an email to iitethicsbowl@gmail.com.