Ethical Echoes in the Legal Limits of Patent Monopolies, a discussion with Dr. Charles Krikorian

On Tuesday, October 1, join Dr. Charles Krikorian for an informal discussion of the legal implications of patent law and its ethical boundaries. We will see to answer questions like: Should a surgeon be able to prevent others from practicing his/her technique without first paying a license?, What is different about drug company patents and patents for surgical techniques?, Why are gene companies unable to patent their discoveries?, and other questions about the legal limits of patent monopolies. The discussion will be held in the Life Science Auditorium (LS 111) at 3:30. Coffee and cookies will be provided. Special thanks to the Biology Department and SAF for their help in making this lecture possible. 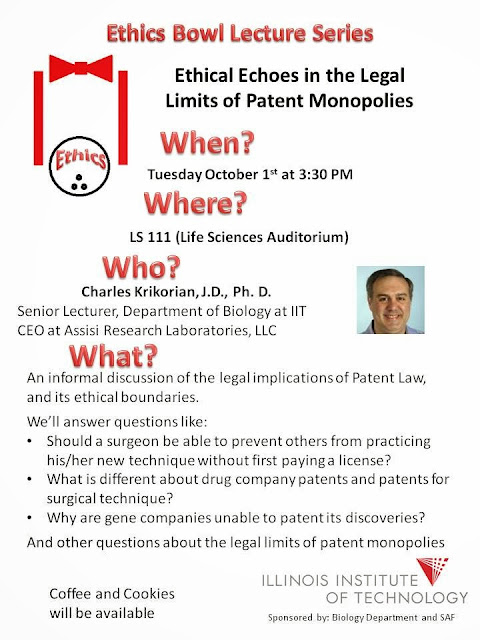 There has been a flurry of news coverage over the post that David W. Guth, an associate professor of journalism at the University of Kansas, posted on twitter the same day as the tragic mass shooting at the Washington Navy Yard.

According to the Chronicle of Higher Education, Prof. Guth tweeted, "The blood is on the hands of the #NRA. Next time, let it be YOUR sons and daughters. Shame on you. May God damn you."

The tweet set off a maelstorm on social media, and on Thursday of that week the University of Kanasas released written statements condemning the professor's message. That Friday, the university placed him on leave. The professor released a statement to the Associated Press that same day, agreeing with the University's action in light of the threats that he and others had received.

Yesterday, Chronicle blogger Robert Jenkins released an interesting op-ed piece called "Speech in the Balance" which argues that even though many of us might disagree with what was said (for a multitude of reasons), he certainly did have a right to speak his mind without penalty.

What do you think about this news issue? Does Professor Guth have the right to make these kinds of statements on Twitter (or other social media platforms) with impunity?

Does the University of Kansas have the right to put Prof. Guth on paid leave because of his statement? Does their statement that it was done, "to prevent disruptions to the learning environment for students, the school of journalism, and the university," seem adequate?

Should employers have the right to discipline employees for what they post on social media? Does a public university, who has a tradition of academic freedom, also have this right?
Posted by CSEP at 3:53 PM No comments: 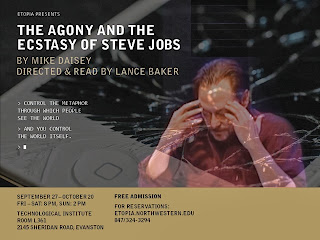 Every year, Northwestern University's McCormick School of Engineering and Applied Sciences puts on a play seeks to inspire a cross-disciplinary dialogue about the role of science and technology in society. Called the that Engineering Transdisciplinary Outreach Project in the Arts (ETOPiA) project, performances are free and open to the public.

You can reserved tickets and the following URL or phone number. ADMISSION IS FREE so be sure to reserve in advance:

A quick synopsis of the play:
A harrowing tale of pride, beauty, lust, and industrial design, THE AGONY AND THE ECSTASY OF STEVE JOBS, illuminates how Jobs' obsessions have shaped our lives, taking the audience all the way to China to shine a light on our love affair with electronic gadgets and the human cost of creating them. After a public radio controversy on "This American Life" which featured the author Mike Daisey in 2012, the play was revised and all fiction stripped away to produce the current hard-hitting version.

The performance at last year's play, "The  How and the Why" was excellent, and reviews seem to show that this year's play will be equally thought-provoking.

Hope to see you at one of the performances!